A group of engineers had a lot of fun this spring teaching students at Houston Heights High School about bridge design and team work.  This was the third year that these volunteers administered a program called Engineering Alliance for the Arts at the high school.  The program started in the San Francisco Bay area in 2000 where structural engineers created the curriculum (see http://eaabayarea.org/ for more info) for high school students to introduce the world of engineering to the visual and performing arts.

The curriculum covers the types of bridges – arches, trusses, girders, suspension, cable stayed – in common use, principles of bridge type selection, modes of failure, the use of scale drawings,  and some fundamental math applicable to bridge design.  The curriculum is designed to draw the students into working as a team, creating a model bridge that is aesthetically pleasing as well as functional, communicating their thought process, putting their thoughts on paper, and making a formal presentation of their solutions.

Each team of two to five students chose a problem from two bridge scenarios.  One was a span of 1800 feet across the Knik Arm at Anchorage, Alaska, intended to carry four lanes of traffic and a bike lane.  The other was a span of 180 feet near Maui, Hawaii, intended to carry two vehicle lanes, two bike lanes, and a pedestrian path.  The requirements for both scenarios were to create bridge scale models that blended well into the local conditions.  Another requirement was that each bridge should be able to support a brick at midspan without excessive deflection.  The primary material for bridge construction was foam board supplemented with straight pins, string, glue, and paint.

One of the early activities was for each student team to build a simple bridge from specified plans and load test it to failure by stacking bricks at midspan.  This got the students’ attention and helped them understand modes of failure.  Five of the teams selected the Hawaiian scenario and two selected the location at Anchorage.  Each team gave setting-appropriate names to their bridge such as the Kanaloa bridge in the Hawaiian scenario and the Snowfall bridge in the Anchorage scenario. The classes met once per week through the months of February to April.

On May 1 the student teams presented their rationale for bridge selection and design in front of a panel of judges and in front of the other teams.  The teams were judged on the aesthetics and structural functionality of their bridges and on their oral presentations.  One bridge was selected as the best result in each of the two scenarios and all the students and judges voted on a People’s Choice.  The accompanying pictures show the results.

Thanks are due to several people and organizations who made the program possible this year.  The engineer volunteers were Oscar Valdez of Fractal Structural Engineering who chaired the committee of volunteers; Ed Kile and Mahnaz Ghodsifasaei of Structuneering; Dhrudat Patel of Henderson Rogers; and Will Torres of HNTB Corporation. 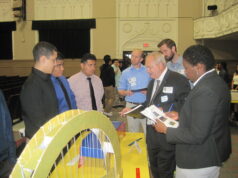 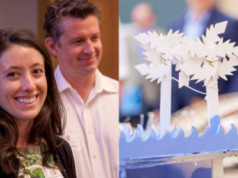